Wow, but this one was tricky. I started out 136 words over, and managed to trim it down to 500 exactly.

Are you interested in taking on the challenge? Find out the rules and where to link your story over on this post. You can read what others have written from there, too.

edit: I added in the link and added the prompt photo. I also added in that he followed the tracks as I'd originally intended and forgot to do in the rush of the morning routine. I'm sorry. :(

Tommy checked that his wallet was in his back pocket. He picked up his backpack, stuffed with clothes, his MP3 player and speakers, his favorite blue water bottle and a spare set of shoes. 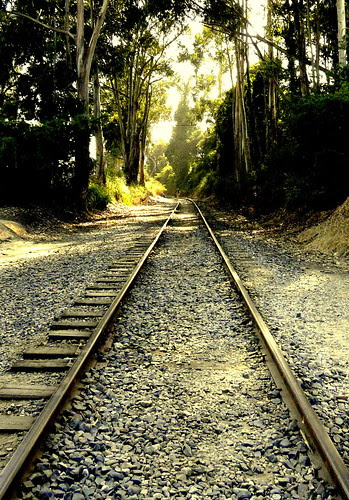 "Okay." He took a deep breath and grabbed his jacket on the way out.

Tommy snuck out the back door, hopping the fence separating his lawn from the forest. The foliage was so overgrown, his house was out of sight in a few steps.

Tommy wove through the trees until he reached the train tracks. He followed them, looking back to see if he was followed. No one called his name. No hard footsteps came behind him. He'd gotten away. The smell of smoke touched his nose. Tommy pulled the straps of his backpack to hold it steady as he ran through the trees. Two other boys were sitting next to a small fire at the bottom of a small hill. He tripped on an exposed root on his way down, the momentum causing him to slide across the ground.

The other boys cackled at him. Tommy tried to ignore the laughter as he approached.

"Dad worked from home today," he explained, dropping his backpack against a tree.

"Well, at least you made it," Robbie greeted him. "Just in time, too. We're deciding where to go."

"Robbie wants to go work on a boat," Jim frowned.

"Not a boat," Robbie shot back. "A cruise ship. You know. The kind people go on vacation on. Anyway, it's better than your suggestion," Robbie charged.

"Not the circus again," Tommy frowned. Jim puffed his chest.

"All runaways are supposed to go to the circus. They're the only ones who will hire kids without asking questions."

"Why can't we just go to the mountains? We can find an abandoned gold miner's cabin and fish for food."

Jim and Robbie frowned. "Well, it'll probably be the easiest," Robbie agreed slowly. A sharp trill came from his pocket. He looked at the other boys sheepishly as he answered the cell.

"You brought a cell phone!"

"Mom made me after I came home burned."

"It was one finger," Tommy argued.

"Tell me about it," Robbie grumbled. "But she said if I wanted to keep running away, I had to start taking my phone." Jim sat down and joined the other two as they sulked.

"Alright, let's set up the tent," Tommy eventually charged. Jim walked over to the bush where they hid their plastic storage box, pulling out the tent and their sleeping bags. Robbie opened the picnic basket his mom packed while Robbie set up his MP3 player in preparation for spending their night in the mountains with the bears and fish.

Is there anything cool your parents let you pretend growing up that wasn't 'in the norm'? Something you wish they had?
Posted by Carrie Sorensen at 11:41 AM