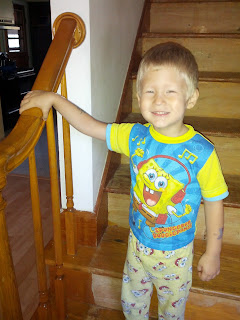 We've had a couple of crazy days where sleep has taken a third row back seat in preference for different sports, camp, etc. It's taken a toll on Joshua, though he's trying so hard to still be happy.

One day for nap, he was alternating between tears and giggles, fighting hugs to begging for them. I told him he had to stay in bed until he slept, and he could only wake up when he was rested and happy again.

Two hours later I heard his door open and his footsteps at the top of the stairs.