Ha! This week I was prepared. This may mean I'm catching up with my long To Do List - or it could mean I got a bit lucky. ;)

I present to you my Snapshot Reveal. As usual, the required words are in bold. Don't forget to add yours by 8 PM on Tuesday to be eligible for the ad contest. You can check out more about that at last Wednesday's Snapshot Prompt Post.

"What do you think? Does it need another coat?" 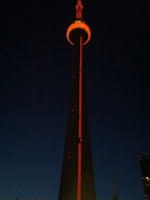 Ella stood back and looked at the painting on the wall, a floor to ceiling mural of the Space Needle at night. The orange lights worked well with the faded blue color they had on the rest of the walls, those glow in the dark plastic star stickers on the ceiling.

"I think that's plenty. It has to dry, after all." Ella smiled at her husband. He was looking around the room, too, but with a look on his face saying he hoped they were done.

"I still say the Needle is strange to have in a nursery."

"Story," they finished together. Ella laughed.

While she stared at the mural, Vic wrapped his arms around her from behind, resting his chin on her shoulder. This was the place they had met, it was where they spent their anniversary. This was the place they'd decided it was time to start a family. All good beginnings happened up there, high in the sky. It was on the Earth they'd faced and struggled through the challenges of those beginnings.

Soon, they would have a new start down here, too. The best start.

"Why don't we come back in an hour or so and see how it looks dry?"

Ella turned her head and kissed Vic's cheek. Her lipstick left a faint shimmer. She smiled at the mark even as she wiped it away, laughing when orange paint smeared in it's place.

"Why don't you shower and I'll get some lunch together?" Ella suggested. Vic dropped a kiss on her lips, then they left the room together.

Ella waited until she heard the water running before going to the computer in the kitchen's office area. She turned it on, ignoring the software update pop-up and clicked onto the adoption web page.

"Soon," she whispered. She hadn't noticed the bathroom water turn off. She didn't know Vic was behind her until he kissed the top of her head.

"He'll love his room, mural and all," he told her, his voice deeper and thicker than normal.

"Yeah," Ella agreed, leaving the photo of their baby boy on the screen while she went to finish their lunch.
Posted by Carrie Sorensen at 9:38 AM