Snapshot Reveal: Cool by the River

This week's prompt had me stumped for the longest time, but then I met two brothers who just set the photo and mandatory words into action.

The inspiration comes from last week's Snapshot Prompt. Tomorrow we'll have a new one, so link up your own contribution soon. :)

Cool by the River

"Do you think if the train fell into the river it would cause a tsunami that would wipe out all the towns in it's path?"

Vic looked down at his little brother, curling his lip to show the six year old how much of a kid he still was.

"Not a chance." At eight, Vic was a lot more grown up than Ben. Vic didn't come up with silly stories any more. He had science in school that taught him how things really worked.

"Wouldn't it be cool, though?"

"It would make a big mess. Lots of houses would drown."

"The army would stop them."

"They couldn't get here fast enough." 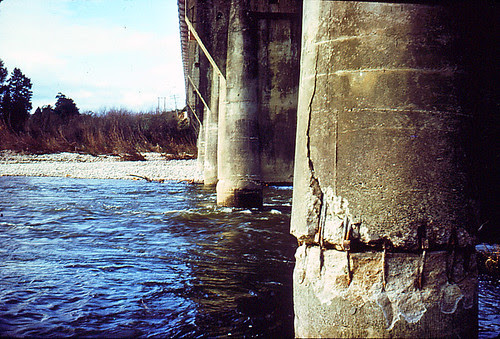 There was a long pause while Ben stared at the rock in his hand. The boys were sitting on the shore of the river, wishing they had something to fish with. Instead, all they had was a hard beach covered in a carpet of rocks and a bridge, each of it's legs a tall tower holding the rest of the world away from the brothers.

"Well, maybe it's bad guys who make the train fall. Maybe the army is already here to stop them but they're not quite fast enough to stop the train from falling but they can stop the tsunami."

Vic looked between the bridge and then down the river. He could see it all play out in his head, just like Ben said. Helicopters and motorcycles would be filling the sky with loud noises. The cars on the bridge would all crash together and their drivers would hide inside while guns went off all around them. The train would fall down into the water, landing all twisted like a broken snake that would set off the huge wave. It might work. Maybe. Vic glanced at Ben out of the corner of his eye.

Ben threw his rock into the water. It barely splashed.

"It would still be cool."