If this isn't our first fat lip, it's our second. 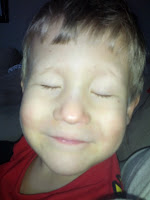 I heard Joshua crying from outside (playing with his older cousin). His cousin came in faster and first, telling me that Joshua fell. Joshua came in behind him, hands to his mouth, bleeding. 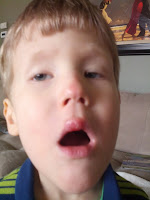 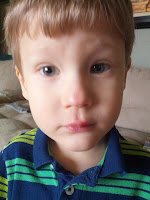 I don't know why, but when I see blood around mouths, I immediately worry teeth have gone through the lip. In this case, they hadn't, nor were there any broken teeth. Just a concrete scraped lip and nose that looked swollen, but not horrible, once cleaned up.

The day after, the scab on his lip was so thick, he looked like he had a bit of a mustache. I didn't get a photo of that, unfortunately. Now, almost a week later, he's nearly healed up, all remnants of this year's first 'big' boo boo gone.


Posted by Carrie Sorensen at 7:00 AM