There are a lot of writers taking part in these weekly prompts. It's exciting to look at everyone else's interpretations while I'm trying to hammer out my own.

To see what everyone else is writing, or to add your own take on the prompt, visit the original post. But be sure to read my story first. ;-)


The charms sparkled in the sunlight, reflecting little dancing pools across the paper. 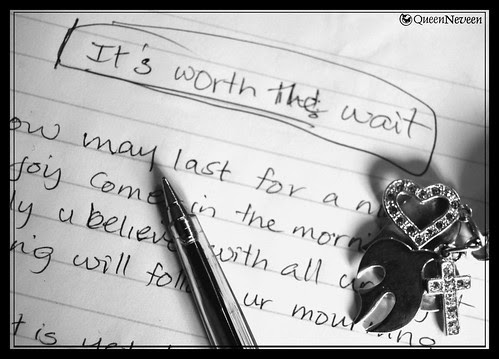 The cross had been the first one he'd given her. Once a pin on his shirt sleeve, he'd had it altered so it could hang on a delicate wrist chain. The next time he'd come, he added the heart, slipping it on the bracelet even as she slept.

Today, a silver dove was added, flying toward the other two charms. She touched each one with her fingertip, both loving and loathing the small decorations. Each one had been a separate birthday present, marking every year from the first moment they had met.

He had crashed her 15th birthday party. She had approached him with words about bad manners, but she had really just wanted to talk to him. He hadn't said much in reply, just smiled a kind, longing smile. At 15, it hadn't been difficult to fall for the mysterious stranger.

She'd worn the cross for a year. She'd considered taking it off but hadn't been able to bring herself to. The morning of her 16th birthday, she'd discovered a new charm on her wrist.

She'd taken the bracelet off that day, knowing it was him. Always watching for brooding eyes and that quiet smile, waiting for the opportunity to tell him to leave her alone. He was a creep, sneaking into her room like that, not even having the decency to say hi. If he was around, though, he was a chameleon. She never caught a glimpse of her party crasher.

Now the bracelet was on her desk. Her internal thermometer dropped with shock, burned with anger, then settled down when she saw the words written on the paper. "It's worth the wait." Words of morning light, warnings against regret, and promises of hope carried on the wings of a dove.

What the hell? The silent question burned in her mind. He'd come back, but she hadn't seen him. Again. He was telling her to wait, but for what? For him? He'd never given her any reason to trust him, much less to wait for him.

She thought back to her 15th birthday, to his silent observations, his quiet care, the emotions trapped in his eyes and curling his full lips.

Enough. Enough thinking about him. She would not be that girl who fell for sparkles in the sunshine. If he wanted more of her, he would have to give her more of him. Gathering paper, pen and charms, she opened the drawer to her desk and tucked them all away.
Posted by Carrie Sorensen at 10:57 AM