I hope you had an enjoyable Holiday Weekend. Now that it's back to work, I have a story to help start the week.

This is my response to Wednesday's Snapshot prompt. If you would like to participate, link your story up to the original post here.

Then, come back tomorrow for for the next Snapshot prompt chosen by me!


"What the hell are you wearing?"

Raul's arms squeaked as he lifted them up. A big grin split his face.

"You said you wanted to scare them."

Will looked at his brother-in-law, dressed in black overalls and a black fisherman's raincoat. Yep. That would do it.

Will stopped Raul at the edge of the forest, just before the old lake house. He ran his fingers through his long hair, making sure it was still greasy, pulling a few of the strands to tangle in his day-old beard.

"Okay. You stay back by the trail in case they see me and try to sneak back," Will ordered. Raul nodded, widening his legs in what he thought was a guard stance, arms down to his sides. "Make sure to stay here," he reinforced, meeting Raul's laughing brown eyes.

"I wouldn't desert you, man." Will nodded, but watched Raul the first few steps. Raul sent a jovial wave, assuring Will he was part of the plan. Satisfied Raul was set, Will snuck toward the lake house.

He knew he wasn't meant to have seen the note. It had been written on an envelope which had been thrown away. Will would have ignored it if it weren't for all the stars sketched on it. He'd stared at the discarded paper, weighing his options. Finally, he'd pulled it out and read the damning words which had led him here.

Reaching the lake house, Will crept around, peaking in the single pane windows. He jerked back, then looked again when he saw them. Wrapped in each other's arms, laying on the old couch. He jerked away with a scowl. He didn't want to see this. 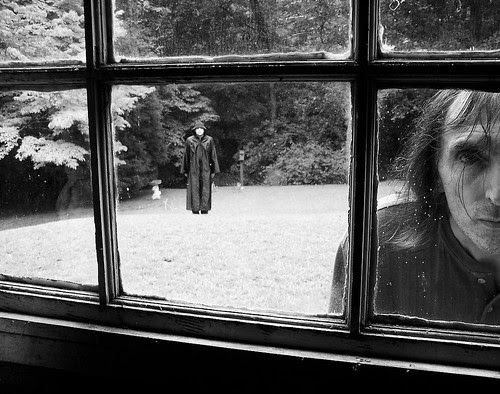 Will began scratching the window with his nail, cursing when it resulted in a paint splinter from the bad paint job. Looking around he found a stick, then tried that against the glass. A satisfying screech made him smile. He heard a thump inside. After a few seconds, he dared to look inside again.

That damn boy was looking out. Will's face morphed into a fierce scowl and he jerked toward the glass. In the background, he heard a girl scream. The boy disappeared along with the girl. He turned around, leaning against the house as he watched them run back toward the forest.

Raul played his part beautifully, jumping out at the pair from the trees, doubling their speed back to the main house.

Will laughed and met Raul at the tree line.

"You think that did it?" Raul asked.

"I'll think of something else if it didn't," Will returned. Raul shook his head and laughed.

"Man, if I ever have a daughter, I'm calling you when she starts to date."