I'm not going to lie - this one had me stumped. Then I just started writing, and, again, I can't lie. I love the way it turned out. I hope you enjoy it, too, and are inspired to get your own writing going.

"Look over there," Aaron whispered. "That would be a great shot."

I scanned the park but didn't see what he did. Of course, I had only taken photography because Aaron talked me into it. Our current assignment was an 'Urban Photo Diary.' Aaron suggested the parks and I followed because I desperately needed him.

"I don't see it," I finally admitted. Aaron lifted his large-lensed camera, the one you know cost a couple hundred dollars. As he focused his lens, I raised my own slim, metallic pocket camera and snapped off a few quick shots. My click was silent, but timed perfectly with Aaron's soft whir. 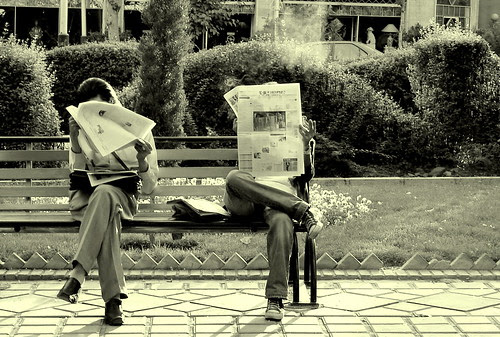 "This is what I saw." He turned to show me the screen. He had taken a photo of two businessmen sitting on a bench, each reading a paper.

"Okay." I was starting to think taking this photography class was a joke. I didn't get it like Aaron did.

Aaron smiled and shifted closer. I took a deep breath of his cologne and tried to follow where he lead.

"Their legs are crossed, but away from each other. That says they don't know each other and are a probably little uncomfortable sharing a bench. The guy on the left put all his stuff on his lap - insecure. The guy on the right put his stuff on the bench. He's saying they can share, but to give him space. He's confident."

"Because of where he put his brief case?"

"And his shoes," Aaron winked. I looked again. The guy was wearing canvas hi-tops.

"Probably the same way you can do equations in your head," he answered. "It just happens. This is going to look really good off the printer," he murmured, speaking to his camera. I watched him for a moment, my awe surrounding him like a halo.

I shifted through the photos I'd taken that day. A bench colored with graffiti, an odd angle of a statue, a stone and iron fence lining the pale sidewalk. All of these had been suggested by Aaron, but others had not. Aaron, holding his camera up as he took that last group of photos. Aaron standing at the corner, camera in hand, a huge backpack of his supplies looking like it would topple his narrow frame. These were the ones headed for my printer, even if they were a little blurry, or the framing wasn't quite right.

"Do you think we have enough?" Aaron asked with a frown. I laughed and shook my head, knowing he had ten times the photos I did.

"Come on," I ordered, standing up. "Let's go get something to eat. I'm sure you'll find a million things to capture between here and there."

"You might, too," he offered with a crooked grin and I shook my head, knowing he was the only thing I wanted to photograph.

What do you like to photograph? Let me know in the comments. :-)
Posted by Carrie Sorensen at 10:49 AM