The Snapshot Prompt took me to a little darker place this week. But where else can a spiraling staircase go?

Down, down, down the harlequin stairs. One hand on the snake-like rail, the scaly indentions feeling like speed bumps to her fingertips. A tube of lipstick in the other was wearing down to a nub, the bright berry color marking each turn she took, arrow pointing to the exit like they did in mines. There hadn't been many turns for a while, except for the smooth curve of the narrow staircase. 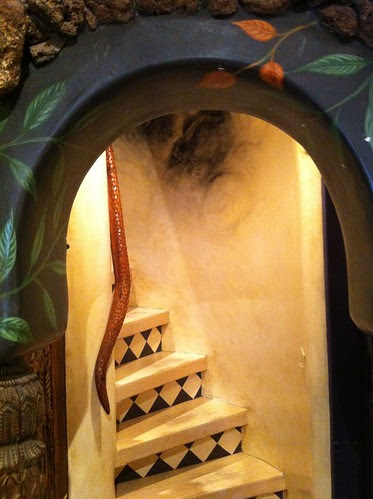 Alicia had been at work on her computer, sorting through emails and arranging projects by priority. A note scratched in pencil on masking tape pressed to the underside of her keyboard had caught her attention. It was an odd place to leave a note. She had only found it because a few paperclips had spilled on her otherwise neat desk. Once she read the words, she ripped it off quickly. Shredded pieces found themselves in different waste baskets around the office.

Easily destroyed, they were not words to ignore. They stayed with her through talking to clients, laughing with co-workers and taking notes at meetings. She packed up as the clock rolled onto the 5, calling out goodbyes from the elevator. Behind the wheel of her car, Alicia closed her eyes, whispered a prayer, then headed downtown.

She handed over her keys to the valet, then nodded to the gatekeeper of the Chameleon Bar. Insults were flung at her back by people waiting in line as Alicia pushed through over-sized doors into a low-lit den of shifting colors. Weaving through bodies projecting sticky warmth, she made her way to a door that blended perfectly into the aubergine walls.

"Don't lose your way," warned words so decorative they could only be separated by the damask sheen in the paint if you knew where they were. Alicia had dug out her lipstick, then headed into the tunnels.

Left a dozen times, right at all the lines. Down the tiny turns, back to where it burns.

The words penciled to her on the flesh-colored tape, directions through the LED-lit maze. Now she was at the bottom, passing under an arch painted with leaves, a symbol of the life that never found its way this deep.

There, in a round chamber, sat an alter in the middle, a fire kindled along the surface. The fickle light was no match for the LED's, but it was the heat that mattered.

Alicia stepped forward softly. Orange light danced over her without the benefit of shadow. Her hand reached into the flames, pulling out the vial. Without the contact of the vial, the alter lost its fire, growing cold as Alicia turned her back, clutching her prize to her chest.

She had it now, much better than any of the others locked in her freezer at home. This would be enough to make all her dreams come true, and even a few more.

After all, a soul on fire was worth much more than one on ice.
Posted by Carrie Sorensen at 7:53 AM