How did the weekend go so fast? Probably because it was so much fun. :-)

Well, here's my Snapshot Prompt for the week. It's mood is in contradiction to how I actually feel, but I tried to do Tena's photo choice justice.

Be sure to check back to the prompt post if you would like to share your own Snapshot Story and join in our monthly ad contest.

Toby walked into the summer cottage, dropping suitcases just inside the door. A cramp threatened his neck so he gave his shoulders a quick roll, tilting his head to the side to ease the pain.

"Come on in, Tobbs," he called to his German Pointer. Once he'd decided he wasn't going to have a son for a namesake, he'd decided to get a dog to do the job. It had worked out so far, ever since he'd trained the mutt to stop jumping on people.

The cottage wasn't very big, really only 3 rooms altogether. The main room including enough space for a small kitchen, a couch and an old TV. The bedroom and a tiny 3-piece bath took up about a third of the place. Luxury was not the name of the game here - fishing was.

Heading toward the cupboards, Toby opened door to do a preliminary check of what food had been left behind. There were a few cans of beans and even a dented can of cranberry jelly. As long as the fishing was good, it would be plenty to get him through the long weekend. 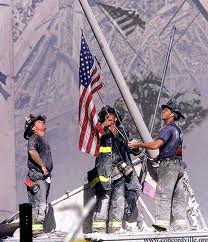 Before he closed the last cabinet door, Toby stared at a photo taped inside. Three firefighters were holding on to a flagpole, the stripes and stars hanging like a limp kerchief, grieving along with the world. Behind them was a pile of rubble, the place where she had--

Toby's chest constricted his breathing. He slammed the door, clearing his throat loudly and blinking his eyes, telling himself it was hard to see because it was so damn dark in here.

Well, might as well go back outside before his eyes adjusted. Grabbing his pair of poles, one black and one pink. It wouldn't have been what he picked out, but she had always liked pink. Over the years, he'd slowly replaced most of it. This pole was good, though. It caught more fish than his fine black one, sometimes. So, this he would keep, along with their yearly fishing trip.

"Tobbs," Toby called, the dog jumping down from the couch, eager to get back out. Tackle box and poles in hand, Toby forced himself out the door. He would have to catch something if he wanted to eat tonight, after all.
Posted by Carrie Sorensen at 10:35 AM