Just to let those who are curious know - choosing the prompt photo and words does not make it easier to write. That being said, of course I still wrote it.

I hope you're finding ways to enjoy your beginning of the week. Here's a little something to help you along the way.


Leon's tie flapped in the wind over his shoulder as he came into the drive. He slowed the motorcycle gradually until he could put the sole of his boots on the ground to walk the bike to where she waited.

"You know you have helmet hair," Juniper teased when he peeled the black shell off.

"It's a good thing I have hair wax, then," he countered with a smile.

"Where is it?" she asked in doubt, looking at the wind rough suit and the tie that wasn't quite ready to fall back into place.

"In your bathroom." Juniper blinked in surprise, then laughed at his cheeky grin. Long legs took Leon from his bike and into the narrow townhouse.

Juniper's hand fluttered while she considered going after him. Instead, she folded them together over the gem embellishment on the waist of her satin dress, looking up at the sky. What had been a white froth of cloud cover most of the day was darkening into something more ominous.

"Don't be seeing omens where there aren't any," Leon charged. She glanced over at him to smile. He was impeccable, of course.

"It looks like a warship," she ignored him. "No one will come to the gallery show in this weather."

Leon looked up at the sky, twisting his head. "A warship? See, that's why everyone will come. Your art is going to show them the world they don't know how to see themselves."

Juniper shrugged, rubbing her trembling hands over the goosebumps on her arms. "Well, we have to be there regardless. Let's go."

Juniper stared out the window at the city she loved. Little store fronts littered the streets, interrupted by a stretch of posh apartments, or a historic hotel that catered to those who chose to visit the dream, rather than go for it. Juniper was beginning to understand them for the first time, her stomach in knots the closer they got to the Arts District.

Leon chuckled and grabbed Juniper's hand. She squeezed it, intending to let go, but found she couldn't.

"Look, June," he pulled her attention to the front window. "Look at your gallery." 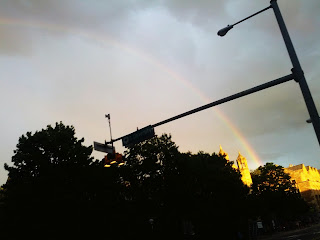 Juniper gasped at the sight, tears welling in her eyes. It was beautiful.

A rainbow cut across the sky, and at it's end was the glowing stone of the museum that was also the site of her first gallery opening.

"Let's go get your pot of gold," Leon murmured, threading his fingers with her. Juniper nodded. Though her smile trembled, it stayed on her face as they chased her rainbow.

What would be at the end of your rainbow?
Posted by Carrie Sorensen at 9:26 AM