We're back and at it again. :-D Welcome to 2013's first Collaboration Challenge starting 5 days shy from it's 1 year birthday. I can't believe how much fun these all have been, and I look forward to seeing what tangled stories this year brings.

Get ready as a story is woven and fought over for the next five weeks. Joining me for this challenge are L.T. Dalin, Gavril Mikhailovich, Yolanda Lane, and Nicole Pyles (in that order). As usual, I get to kick the challenge off (privilege of hosting it.) ;-)

The chill from the chair permeated Anika's jeans and soaked into her skin. She slouched a little more so only the tops of her shoulder blades and hips make contact with the chilly metal. She pulled the over-sized hood on her deep purple sweater over the dark stubble on her shaved head to help hold some of the warmth in her body.

The cops could probably pump the heat from hell into this room and it would still be cold. Concrete floors, concrete block walls, and aluminum furniture, all grey, all fresh from the meat locker as far as she knew. There wasn't even one of those two way windows in this room. Anika lifted a corner of her lips with that thought. The windowless room wasn't to hide any abuse to her - but to hide her, period.

The bolt on the door slid open with a deep thunk. The person on the other side had to shoulder the heavy door open, then maneuvering quickly out of the way before it slammed shut on spring-loaded hinges and the bolt slid into place again. Anika's smile grew.

"Anika." Detective Harper leaned against the door that had almost crushed him. His green eyes peered through a fallen lock of his gold hair. He was handsome, charming and was meant to disarm his young female charge. Anika had seen more beautiful.

She raised her brown eyes to his, meeting his gaze to show him she was not trying to confront him, she was not afraid of him, she saw her time here little more than an inconvenient moment.

"I wish you would reconsider." He always spoke first and last and more. He gave away so much with his words he thought would break her into answering.

"You're better than this." A familiar theme. He'd only said she was better than them once. She'd swung the chair around to catch him in the shoulder on the other side of the table she still sat behind. Since then, he talked to her from the relative safety of the door.

"You have an excellent background. A good school, excellent grades. You have your year of volunteering at the very museum you began to steal from - but not until you met Razor's Edge."

Ah. Anika had been about to yawn, sick of listening to her own history over and over again from Harper's cool voice. This time he'd shared a bit more. They knew the name of the group she worked for now. It didn't change anything, really, but she doubted Harper knew that.

She had broken many things - the law, her supervisor's trust, her parent's hearts. It had all been necessary.

"You could help us. If you could tell us who's behind Razor's Edge, what their goals are, where they're hiding, we could help you. If you returned the amulet, your life could even go back to normal. Mostly. Isn't that worth giving up this gang's secrets, to returning the artifact?"

He lied. Anika wasn't sure he realized she knew that or not. He didn't realize a lot of things - like by putting his back to a door in a room with no reflective surfaces, he would fail to see the alarm light pulsing weakly above his head. All she had to do was stay quiet, let him talk himself into his own head.

"We're running out of time, Anika. The D.A. is only willing to cut a deal with you if we get information on Razor's Edge before they commit another crime."

Harper jumped at the hollow sound of the bolt being thrown. He narrowed his eyes on Anika's face when she failed to flinch, looked up to see the red glow and cursed.

"Come on, Anika," he spoke quick, pushing against the door, trying to plant his feet on the polished concrete floor while the door was pushed inward. "I can help you. Don't do this. Don't let them take you back."

The door flew open under Xav's shove. He wore a hoodie that matched hers, though his hood was thrown back to show his mussed brown hair and the anger in his golden eyes. A bruise was forming on his jaw, accentuating the tick in the clenched muscle.

"Let's go, Annie," he ordered. She rose smoothly from her slouched position, watched in disinterest when Harper tried to punch Xav only to catch a hook to the shoulder Anika had already bruised. Harper stumbled to the concrete wall and glared at the boy half his age.

Xav stood in the doorway, holding the door open with his left arm, the right one ready to fly into offence if Harper moved toward him again.

Anika paused, looking between the two males. Harper noticed her hesitation and hope lit his eyes. Had his long-winded words finally reached her? Xav huffed with impatience when she moved closer to the detective.

"I was a good student from a good, loving family. I had my feet firmly on the ground and was headed for the high skies of success. So why would I abandon all that? What would be worth stealing for, lying for? Disappearing for?"

Disappointment and confusion wrinkled Harper' as she left him to watch the door slam shut between them. 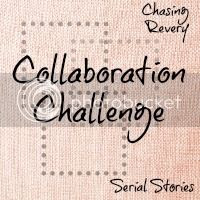 Posted by Carrie Sorensen at 7:00 AM