This Snapshot was tricky, but I did it. (Quickly checks word count and 5 words - good!) 497 words for me this week.

The air was almost stale it was so quiet, until Ethan kicked at an aluminum can left crushed on the crumbled pavement. I followed its path, surprised the aged, brittle metal didn't shatter when it skipped to a stop against a boarded up refreshment stand. Mia wrapped her arm around Ethan's, redirecting him from another pile of trash.

"I thought we were going swimming," I muttered. Mia's green eyes flashed at me.

"The beach is too crowded. Besides, we haven't been here for a while."

Ah, yes. The beach would be too crowded. We couldn't have any swim-trunk-wearing distractions keeping me away from Mia's idea of my "perfect match."

Speaking of, the buzz of Troy's remote control car announced he had caught up with us. Last I'd seen, he'd stopped to test his big-wheeled toy in the rotting ruins of a picnic pavilion. I'd ignored Mia's shove indicating I should stay with him. If he was going off, he seemed as excited about being set up as I was. Mia wasn't going to give up so easily.

"Do you know why the park is abandoned, Troy?" He answered Mia with a nasal grunt. "Why don't you tell him about it, Carly?" she demanded, then dragged Ethan in another direction as if some alone time was all Troy and I needed. 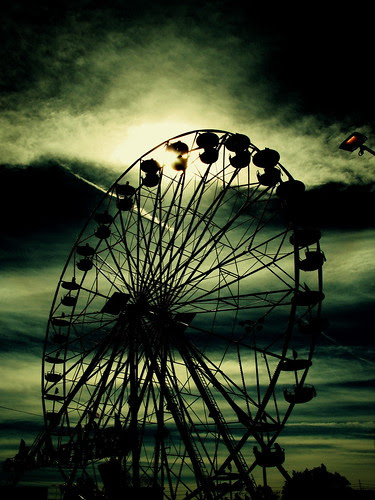 "They say this land used to be owned by a rich gold miner," I began after a moment so I could tell Mia I'd tried. Then I could spend the rest of the afternoon breathing stale silence. "When the park was built, his ghost was angry and would scare people, mostly on the Ferris wheel. That's why they closed. They say he scared everyone away."

"They should be committed at the county asylum," Troy grumbled. I smiled in agreement, though I didn't say anything more. Troy seemed as happy as I to keep chatter to a minimum.

We followed the plastic car as it climbed and rolled in front of us. At the Ferris wheel, we stopped to watch afternoon sunlight stream golden through the blackened wheel.

"Maybe he was afraid of heights," Troy suggested. "Which is why he scared people here. He was a miner. Small, dark places would be more his style."

My grunt was very Troy-esque. The boyish smile he sent me in response stopped my heart for a moment.

Mia appeared out of nowhere, her spine stiff and her steps brisk. Ethan followed with an indulgent smile.

"Have you two talked at all?" she whispered harshly as she passed me. "Almost dark," she continued sweetly, though loud. "We better get out of here."

Troy and I watched Ethan and Mia for a moment before our eyes met. His hand reached toward me, the black remote control extended. I took it with a nod, then we followed the zigzagging car on our way out of the park.
Posted by Carrie Sorensen at 9:15 AM